Over the summer of 2018, staff worked on the newest project to add to the New York Heritage website.  Staff digitized the Promarian Newsletter produced from 1960-66. The newsletter details the happenings of Maria College campus from course curriculum, the ideas of the Pope which is headlined as “The Pope Speaks…”, poetry, the study of languages and literature, biology laboratories, and discussions regarding the library, music, and glee clubs.
Check the project out!

In 2009, Sister Eleanor Little, Archivist of the Sisters of Mercy of the Americas, Northeast Community, donated eighteen archival boxes of black and white photographs, documents, correspondence, publications and newspaper articles pertaining to the history of Maria College.  The archives has now grown to 78 boxes containing over 4000 items.

In honor of the 50th anniversary of Maria College, a special collection of historical titles was compiled and reclassified in 2008.   The purpose of this special collection is to support research, learning and teaching by collecting, cataloging, and preserving unique titles of interest to Maria College, the Sisters of Mercy and the broader academic community.
These titles are classified as “Special Collection” because of their research potential, uniqueness, rarity, early printing, limited availability, autographed edition and/or physical fragility.  These books, both fiction and non-fiction, may vary considerably, with a concentration on, but not limited to early America history and Catholicism. Also included is a small collection of children’s books. The collection came from sources such as college faculty, local convents, schools and churches.
Rare and unusual titles include:
Ordo Baptizandi Alique Sacramenta Administrandi, a priest’s missal for the sacrament of baptism in Latin, copyright 1686 and published in London by Hen. Hills.
The Key of Heaven, complied by Reverend J.F. Lang, an exquisite little brass and purple velvet bound collection of prayers for priests in superb condition, copyright 1885 by Greil, Wildermann and Company, New York.  The cover has a striking cross made of mother of pearl and brass. 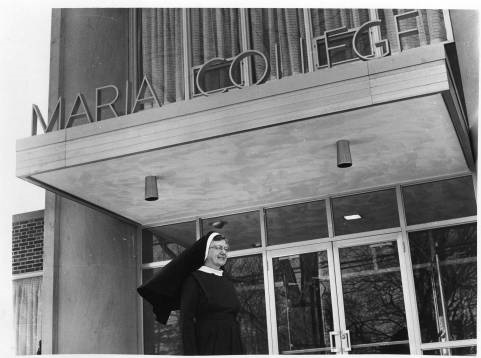 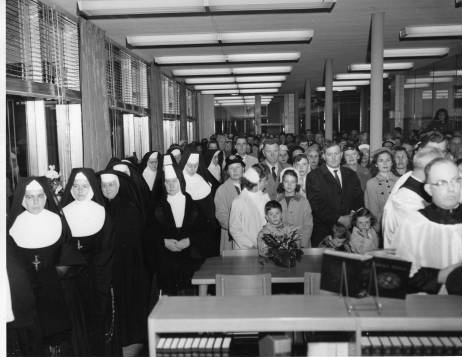 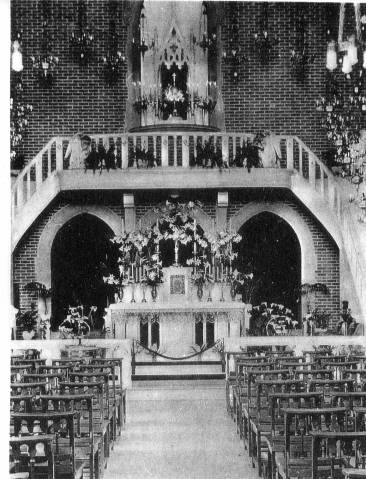 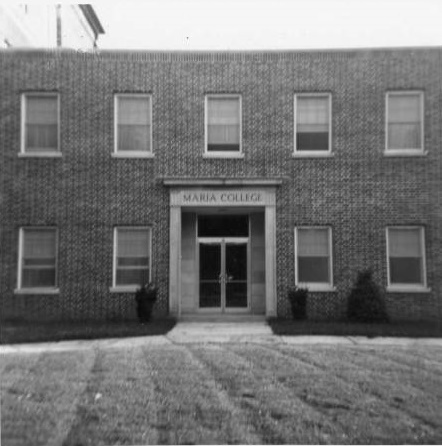 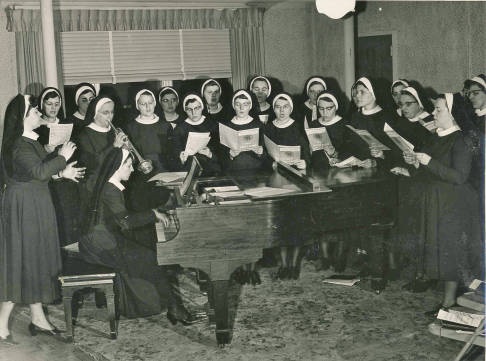 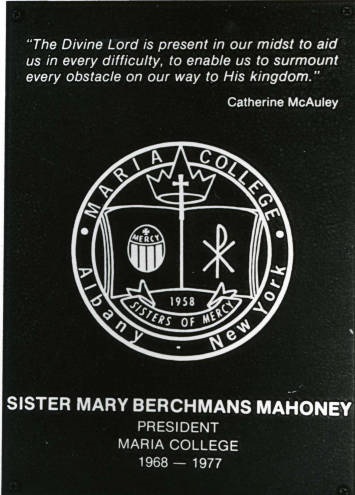 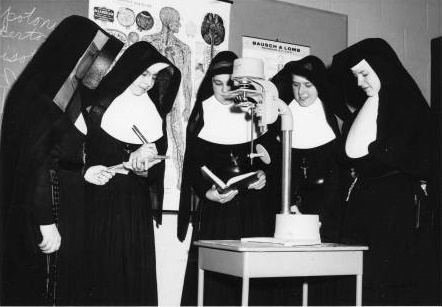 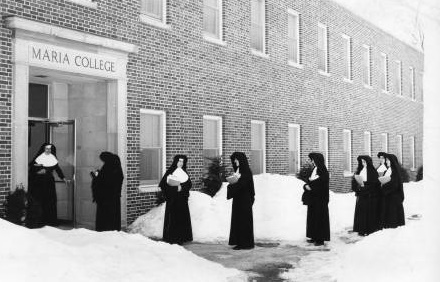 Past Library Director, Sister Rose Hobbs, applied to the Capital District Library Council and received approval for the Maria College Library to participate in a statewide digitization project funded by a grant and coordinated by CDLC.  The Empire State Library Network (formally called New York 3Rs Association‘s) digital heritage website connects more than 170 digital collections.  Images for the site are contributed by libraries, archives, museums, and other cultural institutions.  Library staff members were thrilled to have the opportunity to add historical photographs and documents to this important website for New York State history, which has nationwide access.
Our digital collection contains a selection of the archival materials depicting Maria’s early days, including the groundbreaking ceremony and blessing of the College, as well as historical photographs of faculty, students, board members, presidents, and local religious community leaders and politicians.

Maria College Digital Collection
This digital collection contains a selection of archival materials depicting Maria’s early days, including the groundbreaking ceremony and blessing of the College, as well as historical photographs of faculty, students, board members, presidents, and local religious community leaders and politicians.
Maureen O'Sullivan Cushing Collection of Maria College Albany NY
Maureen Paula O'Sullivan (17 May 1911 – 23 June 1998) was an Irish-American actress.  She was married to the director John Farrow and had seven children with him (one of whom was actress Mia Farrow).  After being widowed for twenty years, O’Sullivan was married to her second husband, James Cushing, a Niskayuna, NY businessman, from August 22, 1983 until her death in 1998.  Mr. Cushing was a member of the board of trustees for Maria College, Albany, NY.  This collection represents personal correspondence written by O’Sullivan to Sister Laureen Fitzgerald, former President of Maria College, as well as the wedding announcement and photographs of O’Sullivan and Cushing related to Maria College events.
Maria College Glee Club Collection
The Maria College Glee Club of the 1960s and 1970s was led by Director/Conductor, J. Robert Sheehan, and included the Religious Sisters of Mercy and students of the College.  The glee club presented programs during the Christmas season and for the Spring Festivals.  The Glee Club Collection contains songs from two glee club record albums digitized to mp3s, a photograph of the glee club and a Spring Festival program.  In addition, there is a Christmas album sung by the Priests’ Choir of the Diocese of Albany, Religious Sisters of Mercy of the Albany Diocese and the Sisters of St. Joseph of Carondelet.
Maria College The Mariale Literary Magazine
The Mariale, the spring literary magazine of Maria College, prevailed from 1961-1976 (missing year 1965).  There are 446 creative works (titles) within the literary magazines.  Illustrations and photographs by students are also included.  Some issues of “The Mariale” have themes.  The 1966 issue is based upon peace as a theme due to the Vietnam War.  In the 1975 issue, the Bicentennial of the United States of America is celebrated, and the students of Maria College commemorate the following:  the spirit of being a citizen of the United States, colonialism, honoring George Washington, Henry Hudson, Quilting, and American Couture. Patrons will be able to read the spirited works of the Religious Sisters of Mercy and the students of the College, understand the historical and literary value of the College and the time period.
Maria College Promarian Newsletter
The Promarian Newsletter prevailed from 1960 until 1966. The newsletter details the happenings of Maria College campus from course curriculum, the ideas of the Pope which is headlined as “The Pope Speaks…”, poetry, the study of languages and literature, biology laboratories, and discussions regarding the library, music, and glee clubs. Some of the Religious Sisters of Mercy (RSM) faculty give suggestions and ideas of how to teach the lower and upper grades of primary school to future teachers, called, “Our Corner.” The RSM give helpful hints on how to maintain a classroom setting with all learners and creative crafts for children. Some of the passages provide insightful information regarding the Sister Formation, information on the founder of the RSM, Catherine McAuley, and understanding the Roman Catholic Church. Photographs of the RSM and future sisters in their habits are important to the time period, especially in the early sixties. The mid-sixties photographs show the transition of when lay students were allowed to attend the college.
Maria College Anniversaries Collection

Maria College celebrated its 60th anniversary on April 25, 2018. In honor of the 60th Anniversary of Maria College, the anniversaries collection comprises of invitations, programs, Maria College Reporter articles, proclamations, speeches, letters, and advertisements with celebratory congratulations from dignitaries and companies of the 25th, 50th and 60th anniversaries. The Proclamations signed by Albany Mayor Kathy Sheehan, New York State Governor David Paterson, and Assemblyman Neil Breslin and more share the history of milestones of the college including the charter date of the college on April 25, 1958 and curricular programs of Maria College.

The Maria College “Reflections” Yearbook Collection prevailed from 1967-1976 and 1980.  The Yearbooks contain photographs of of Maria College clubs, student senate, and student activities. Local government officials and religious leaders such as Mayor Erastus Corning II and Bishop Scully, and advertisements from local vendors are also included in the photographs. Some of the yearbooks contain poetry or sayings as a “Reflection” of the students’ memories made at Maria College. For example, in the 1980 issue of the yearbook, it details the adoption of the Maria College Logo, and its history and representation. In this issue, there are illustrations of the activities of Maria College such as: the Maria Olympics, raffles, holidays, the gift of life, and ale.